Win as one in EA SPORTS™ FIFA 21 on PlayStationⓇ4 and Xbox One with new ways to team up and express yourself on the street and in the stadium. 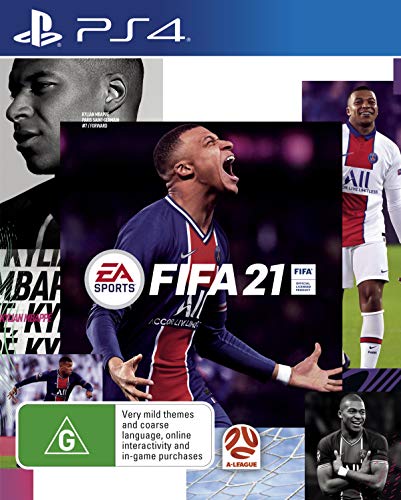 Powered  by Frostbite™, FIFA 21 raises the game with fresh features that let you enjoy even bigger victories together in VOLTA FOOTBALL and FIFA Ultimate Team™, feel a new level of game play realism that rewards you for your creativity and control, manage every moment in Career Mode, and experience unrivaled authenticity that gives you the most true-to-life experience of The World’s Game.

In football, 1v1 situations can open up goal-scoring opportunities that determine the course of a match. In FIFA 21, the new Agile Dribbling system puts more tools at your disposal when you come up against a defender.

New options for influencing your team’s movement off the ball revolutionize attacking build up play in FIFA 21, giving you more ways to break down the defense.

A re-imagined player collision and movement system unlocked by brand new animation systems create smoother player interactions all over the pitch. In FIFA 21, key footballing moments including goalmouth scrambles, battles for possession in the midfield, and attacking duels will resolve more seamlessly than ever before, resulting in more natural encounters between players as they strive to reach the ball.

Informed by feedback from the community, revisions to the fundamentals of football in FIFA raise the game throughout the pitch.

More ways to play. More customization. More locations. Experience the soul of the streets together with friends as you show off your style in cages and courts around the world throughout various forms of small-sided football.

Enjoy brand new ways to play the most popular mode in FIFA as you build your dream squad of players past and present in FIFA 21 Ultimate Team.

Play with unrivaled authenticity in FIFA 21 with over 17,000 players and 700+ teams alongside more than 90 stadiums and 30+ leagues that give you the most true-to-life experience of The World’s Game. FIFA 21 is the only place you can experience exclusive access to the world’s biggest competitions including the UEFA Champions League, UEFA Europa League, CONMEBOL Libertadores, CONMEBOL Sudamericana, Premier League, Bundesliga, and LaLiga Santander. More Video Games